Way back last year the MoRun was my first ever proper 10k. I even admit in this post that I hadn’t even run the distance during training! Oops!

This year I ran again for Velindre but after raising so much money running the Cardiff Half I decided I wanted to raise awareness more than money. If you read last year’s post you will know that I lost my dad to testicular Cancer. What you might not know is that the reason he died is that he left it too late before seeking help. He was too embarrassed to go to the doctor and eventually went with a bad back. By that point it had spread and there wasn’t anything they could do.

In order to raise awareness of this I ran in fancy dress. Well I say fancy dress, what I actually did was run in a corset and a petticoat!!

This is a me in a nice warm house thinking what a good idea it would be to run like this!!!

Hahahahahahahaha *hysterical laughter* it was very very cold on the morning of the race. Well it was November – what on earth was I expecting??? I had to wear shorts under the petticoat as you could see my knickers!! This resulted in a stop at an aid station asking for Vaseline before my thighs set themselves on fire! Note to self- thighs are too chunky to wear shorts!!

The corset I wore was one I had made years ago. Turns out I have less “up top” than I did pre kids!! Great! So I had to take it in so I didn’t flash my boobies!! I did wear a peasant type top underneath as I didn’t think a sports bra showing under my corset was a good look!

The race itself was exactly the same course as last year. I found it easier to complete as I have run quite a lot more than this time last year and the laps were easier to deal with mentally. I agreed with myself that I wouldn’t go for a PB and would just take it easy as it was a bit difficult to breathe in the corset so I had less pressure on myself.

Although the race felt largely more relaxed than previous races, I am quite thankful to the patronising woman I met at 7.5k who made me want to punch her in the face! (I didn’t I’ll just add) What I did do instead, was speed up to get away from her before I did punch her in the face 😉 but she did me a massive favour. Once I found the momentum I found it easier to keep it up and even managed a full blown sprint from just after 9k.

It actually felt really good to finish strong rather than not have anything left to give. I crossed the finish line to almost all my running club cheering me on which really lifted me as I am the slowest out of all of them. My hands were so cold I couldn’t open my water bottle and I only just managed to type my race number into the computer to get a printout with my time on it. I had mentally worked out that I should cross the line around about 1:13 which I would have been pleased with considering my outfit. I looked at my printout and my chip time was 1:10:23!!!! A 10k PB!!! Only by 7seconds but the time I set the original PB I really struggled. This time I felt I was taking it easy. I couldn’t believe it!

In a year I have managed to improve my time by 9 minutes but more importantly (to me) this race wasn’t the struggle it was last year. I’ll take that as a win, thank you 🙂

Well I have neglected my poor blog haven’t I? I’ve got a lot to tell you about though so I had best set some time to one side in order to get the posts I want to write, done!

Anyway first off I want to tell you what I did last Sunday. I can’t keep my excitement in. I ran a half marathon. Yep, that’s right, 13.1miles! I can’t believe I actually did it! I was so nervous in the run up to the race. I’d actually trained properly for this. Not the half hearted attempts I usually do. What would happen if I can’t finish? What if I completely mess up the race? All sorts of things were going around in my head and I was absolutely bricking it!!

I had to drive into Cardiff by myself as hubby was bringing the kids in later on the train. I managed to park in the park and walk facility they had set up so that was simple enough. I went in early to make sure I got a space and the mile (or so) I walked into town was done in very little light. 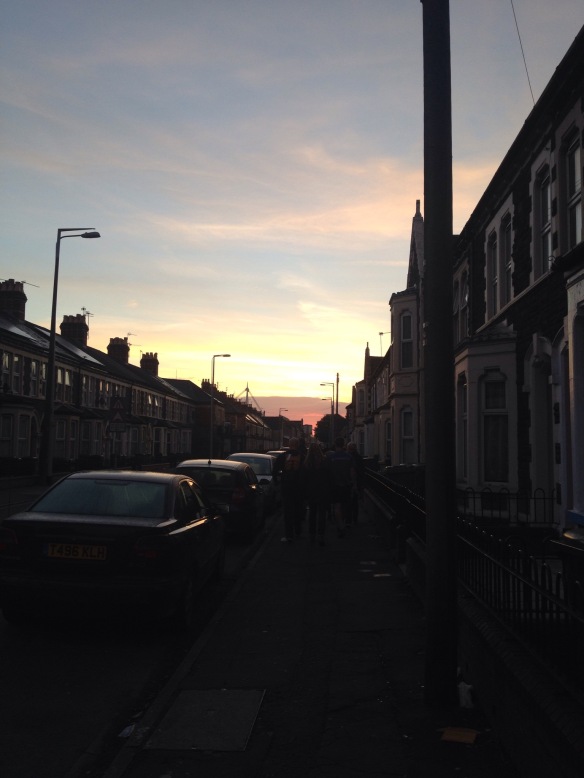 I took my bag to the bag drop and met some lovely ladies from the fantastic Run Mummy Run Facebook page. We queued for the start and sang the national anthem before counting down to the start. As the hooter went, we were going no where! The amount of people in front of us meant it took over 9minutes to actually cross the start line. (It’s actually around the corner in this picture)

Once we did cross the line, the crowd thinned enough to give me enough room to start running. Mile after mile ticked by and I was in such a positive headspace, which is quite unusual for me. I just kept repeating one of my favourite bible verses – “I can do all things through Christ who strengthens me” (Phillipians 4:13) and it kept me going. I knew I could do it and that thought kept me smiling throughout. I am still surprised at how positive I was. Usually I tend to convince myself I can’t do it so this was new to me!

I had to stop for a wee but thankfully I stopped at some public conveniences rather than the portaloos provided as the queue for those were at least 20mins!!

I started to struggle around the 10,11 mile mark as I was getting tired then. I hadn’t tried gels or anything in training so all I had was fruit pastilles which were fine and the organisers had an energy drink station around that point which really helped (even though I had to ask someone to open it for me!!). The mile between 11-12 felt about 5miles long. It seemed never ending but the crowd kept me going. The crowd was fantastic, all the way around! If you ever get a chance to watch a road race please go to support the runners. It means so much having strangers urging you to keep going. Seeing some friends who had come to cheer me really boosted me too and although I did walk the very last hill, I did manage a sprint finish. Mainly because I was so glad to see the finish line!!

Crossing the finish line I was handed a medal, bottle of water, t shirt, banana, can of non alcoholic beer and a goodie bag. I was a bit confused by why it couldn’t all go in the goodie bag and why they expected us to carry it all when I could barely carry myself!! I burst into tears as soon as I met up with hubby and the kids. The emotion was overwhelming! But I was so pleased that I did it and I raised quite a bit of money for my charity Velindre Cancer Centre while doing it.

Well I have quite a bit to catch up on. I’ve been so busy with Christmas Wrapped Up that I’ve had hardly any time to get on the laptop to write a blog post. I’ve got some makes to show you but first off I thought I’d tell you about my MoRun last month.

For some stupid reason I signed up for the 10k which I’m sure all you maths geniuses will know that’s double what I have run in the past!! What on earth was I thinking?? Firstly I thought I would challenge myself but also I felt I wanted to do something more as I was raising money for Velindre Cancer Centre, the hospital that treated my dad before he died 18 years ago.

I was quite young when he died, just a month short of my 13th birthday so I wasn’t really told much about his “illness”. What I do remember though is how lovely the staff at the hospital was to me (and my sister) whenever we went to visit. The atmosphere there was really nice (if you can say that about a cancer hospital). I didn’t really know much about cancer then but the memory of the hospital has always stuck with me and I really wanted to do something to help them give a similar memory to another child in that position.

I chose the MoRun as it is specifically for men’s cancers. My dad had testicular cancer. Thankfully it’s never something that I will, personally, have to worry about but the men in my life are/will be badgered about checking themselves often.

My training for this race was okay but before the actual race I hadn’t actually completed the whole distance before. Shocking right? I have to admit I felt a bit sick on the day and the announcement from the organisers saying there was a chance to change down from the 10k to the 5k was quite tempting. Pride was the only thing that stopped me from doing so. I had told everyone I was running 10k and I would have been really disappointed in myself if I had downgraded on the morning of the race.

We parked up and had a walk around the outside of Cardiff castle on the way to the park.

Can you see the Millennium Stadium in the background?

I had to collect my race number and timing chip from the registration tent and was rewarded with a lovely orange sweatband before I had a moustache painted on by the official “moustache painter” (there was a longer queue for that than the toilets lol!) 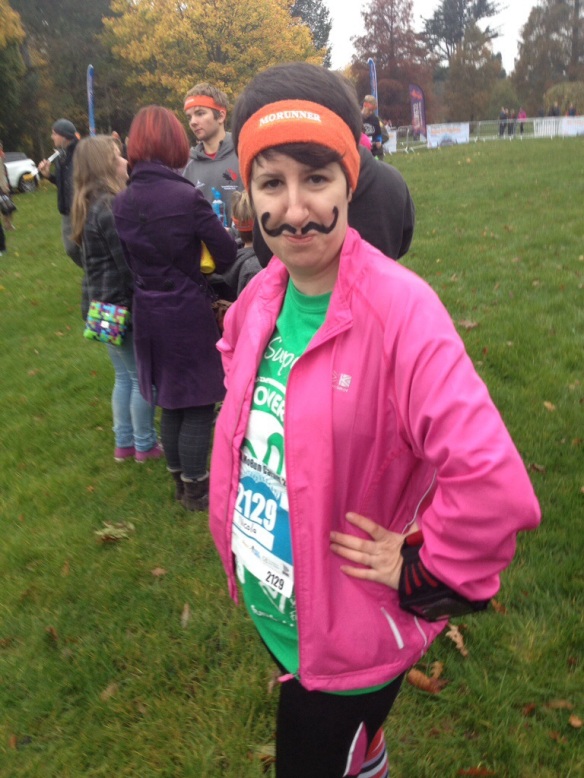 The course was two laps and mentally I found that hard. At almost the 5k point the path split and the sign to the right said “Finish” and the sign to the left said “Second Lap”. It was hard to chose the left path I have to be honest! I found the hardest part of the race to be the bit between 8 and 9k. Mentally that was very hard. There was no end in sight and I was really tired by then. Surprisingly though it wasn’t my slowest km! Hubby and little lady was waiting for me near the finish line and I love seeing them cheering me on. It is such a boost. No matter how tired I felt, I somehow found the energy to sprint the last bit. I was rewarded with an ice cold cup of water and a lovely lovely medal in the shape of a moustache (well what else?)

After a race (and I’m an expert now I’ve done 3, you know!) I always feel so good. I guess that’s the “runner’s high” people talk about. Although I was very tired and so so hungry. Luckily we were on our way to my mum’s who had a gorgeous Sunday dinner on the table as I walked in the door. I love my mam, she’s the best!

In other news, while I was running hubby was teaching little lady how to ride her bike without stabilisers and she did it. Yay! So proud of her. Well she did have 1hr19mins to learn 😉